Hi Ilan,
Thank you for your reply, the texture was applied from her inventory.
She will try it once more asap but she did already with a new mesh and textured from inventory before. Will let you know the result as soon as tested and when I have her answer.

These users thanked the author Zed deTremont for the post:
Chris Namaste

Hi again, she has put it on the market again, says that she did what she always has done and now it works. So solved...

Hey Ilan, only for your information when you come back to your desk on Monday: I found out what was one reason causing the performance issues on Stark. It was the physics engine. I was on ubODE. When I switched back to ODE the CPU is mostly under 20%. Not perfect, but much better. Then I switched to ubODE again, the CPU was on 40-60%. So I stick with ODE until it is fixed.
Additionally I did many optimizations as suggestet on your website, but they didn't have a big impact in my case.

I found another group related issue: I am not able to send out a group message with "Stark Estates". Neither with Firestorm nor Singularity. I tried it on Stark and Kitely Welcome.

Have a nice weekend!
Mattie

Do you have Role in that group that includes permissions to send a group message?
Top

I am group owner with all permissions. It worked before the upgrade. I didn't change something.
Top

There is an old TOUR/TRAIN script that started failing to work when Kitely upgraded to 0.9.1.1.
It turns out to be caused by a slight change to llTarget and it could be fixed by changing one number in the script.
But that script needed to be updated, so I put a new lower lag version in this thread here: viewtopic.php?f=26&t=1896&p=26950#p26950

Kitely will be down for maintenance on February 18 at 12:01 PST (midnight) in order to roll out fixes for the issues marked with (**) in the original post of this thread. Estimated downtime is 15 minutes.
Top

We rolled out fixes for the following issues, so they should now all be resolved:

3) Some people had issues managing groups.

Some additional info regarding the last issue (3). There were several separate problems that required fixing, all of which involved having users and/or groups from other grids. The problem is that third-party grids aren't always configured properly or don't always respond to queries before they time out (either due to their own grid issues or because those grids no longer exist at the address that they had when you joined them). For example, a group that is shown as "Group Name @ http://127.0.01" in your viewer prevents Kitely from being able to contact the grid that the group belongs to because "http://127.0.01" isn't a valid grid address.

What we've done in such cases is enable you to remove such groups from your profile without actually notifying the grids that those groups belong to to do that on their end as well (which we're unable to do because no server responds at the address that the foreign group is listed at). This means that you may still appear to be a member of those groups on those grids and that you may be automatically added to those groups again if you revisit them. The solution in such cases is to teleport to those grids and remove yourself from the group while you are inside the grid that the group belongs to; then teleport back to Kitely, wait a few minutes, and teleport back to the foreign grid to verify that you've been removed from the group. Please let us know if this doesn't resolve this issue for you.

Varying results with same model and same choices in the upload window.

The oddest thing is that if you zero out the lowest LOD (or in this example both the lowest and second lowest LODs) the land impact number raises hugely.

In this test shown, the original LI was 20.000 (rounded) when estimating using the defaults. Then I zeroed out the lowest LOD and it rose a lot and then I zeroed out LOD3 and it was unbelievable). I tried serveral times and got the uploader to agree to 3.00 thinking that land impact was now going to be a rule and not just "ONE li per mesh object". I see that is not the case.

Note that I didn't actually upload the example shown

. I was just further testing. And I noted that the mesh object came in as one land impact as before.
Hope this image works 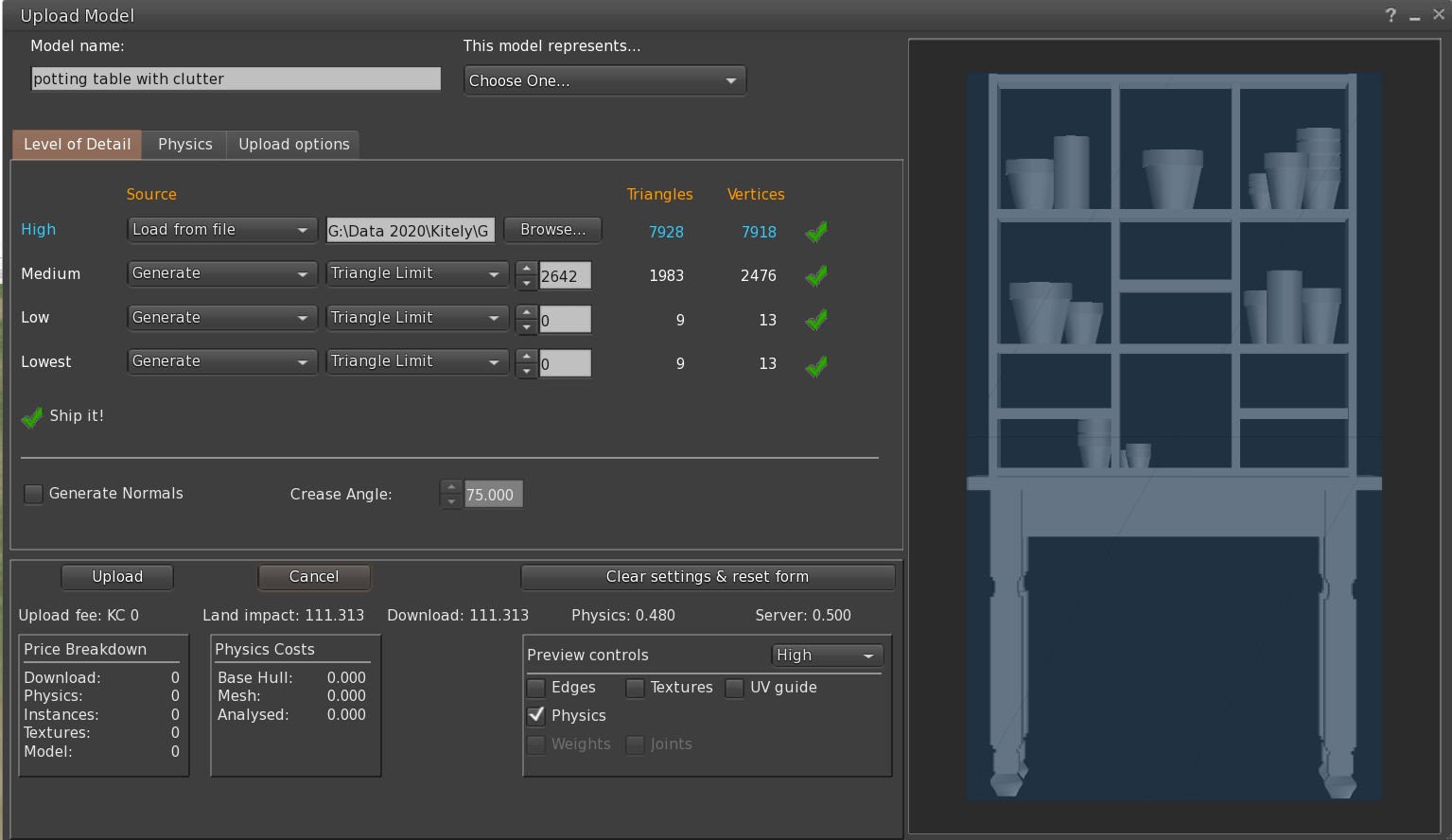 What version of Firestorm and what do you mean by temporary derendering of objects? (what are the exact steps you're using to do that?)


Replying to this issue since the OP did not. I tested this on the sandbox using DERENDER rather then DERENDER AND BLACKLIST (assuming that is what the OP was referring to). It is still derendered after all the time I spent with the report on the uploader.
I am using the advised version of Firestorm -- not the new BOM version which they advised NOT to use.

Return to “Feedback and Suggestions”