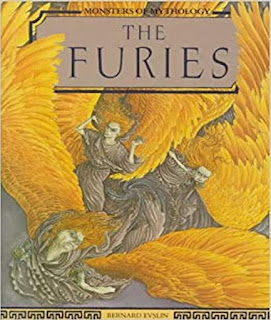 "Wrath of the hell hags"
Monsters & Mythology
THE FURIES pt1

The Furies... three brass-winged hell hags whose mission it is to torment those who have
especially displeased Hades. These three sisters, Tis, Ally, and Meg, take pride in raking
flesh off condemned men, leaving them to suffer throughout eternity. When his so Apollo is
wronged, Zeus borrows the hags from Hades to avenge him. The Furies are thus unleashed on an
unsuspecting world; they fly over the land wielding their whips and claws, tearing apart anyone
who dares to stand in their way.

The Furies' main quarry is Helios, the original sun god, who has stolen back Apollo's sun
chariot in order to take his newly found daughter, Circe, for a joyride through the skies.
After being knocked out of his chariot by a thunderbolt from Zeus, Helios disappears, trying to
escape from the vicious sisters. While hunting desperately for her father, Circe meets Dione,
the Oak Goddess, who teaches the young girl all about good magic, the only thing that can save
her father from the wrath of the hell hags.

The story of the Furies takes place in a jealous, vengeful world full of deceit, trickery, and
danger. But it is a world of beauty, too; for out of its depths rises a young girl, Circe,
whose love for her father outweighs all of the horrors that lie in her path to happiness.