We updated Kitely today with several improvements, including an enhanced version of OpenSim 0.8; experimental support for BulletSim; and better in-world search. We contributed some of our patches to OpenSim core so other grids will be able to benefit from them as well.

We upgraded to OpenSim 0.8. For the full list of improvements, see the Release Notes.

We spent several weeks testing this version of OpenSim, and we found and fixed several problems. One of the most important fixes was for a problem where attachments disappear from the avatar after a Hypergrid teleport. We fixed this bug in Kitely, and we also contributed the patch to OpenSim core. Regions in other grids that run the latest version of OpenSim (i.e., not an official release) should already have this patch. However, regions that use only official releases of OpenSim still suffer from this bug. Therefore, if you Hypergrid teleport to a region that doesn’t have the latest cutting-edge version of OpenSim then your attachments may disappear from your avatar. They’re still in your inventory, however, so you’ll be able to reattach them once you return to the Kitely grid.

On top of our frequent code contributions to OpenSim, our enhanced version of OpenSim includes more than 400 features and optimizations that are exclusive to Kitely.

We now allow world managers to choose which physics engine their world uses. This is done in the Advanced tab of the Manage World dialog: 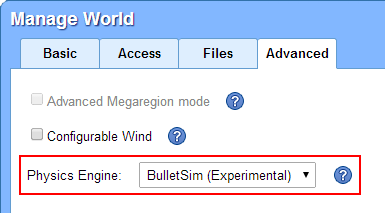 There are three options:

None – no physics. Avatars can walk through any objects in the world. This is sometimes useful for testing, e.g. to check if the cause of high lag in a world is due to the physics engine.

ODE – uses the Open Dynamics Engine library. This is the most widely used physics engine in OpenSim, and it’s the default on Kitely.

BulletSim (Experimental) – uses the BulletSim library. It has some improvements and some drawbacks compared to ODE. If you don’t have a specific reason to choose BulletSim then we recommend sticking with ODE.

We’ve been testing BulletSim for a while now, and unfortunately it doesn’t seem ready for general use. When a world includes moderately complicated Physical objects, BulletSim is very slow (much slower than ODE). We’ve reported these problems and we hope for a solution, but in the meanwhile we strongly recommend using ODE. Nevertheless, we’ve enabled the option of using BulletSim in order to facilitate testing. If the problems with BulletSim become overwhelming then we will remove this option (i.e., leaving only the options “ODE” and “None”).

The in-world search page (which is reached by pressing Ctrl+F) now allows searching for worlds. (Previously it only allowed searching for users.) When you find a world you like, you can teleport to it. This doesn’t replace Kitely’s main search page; it’s only used when searching in-world. 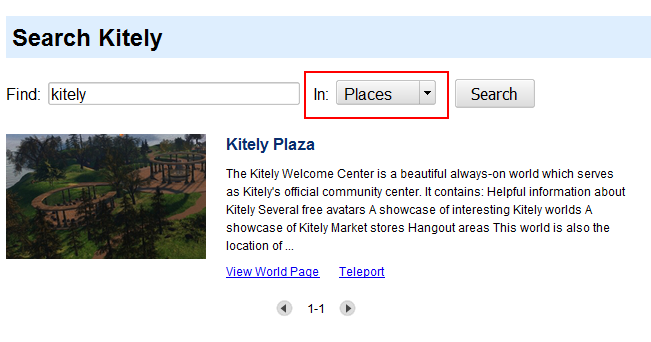 We now show a few customer testimonials in the homepage. We want to send a HUGE thank-you to the people who agreed to let us publish their quotes! These testimonials are important to show prospective new users that other people are using our service and find it useful.

There was a problem where avatars would hover a little above the ground; now they should appear to walk directly on it. Note that this can only be tested when walking on flat terrain or prims, since when walking on slanted terrain the issue of where to show the avatar’s feet is very complicated and therefore it isn’t easy to tell if the avatar is appearing in the correct height or not.

We improved the World Map: the maps should now render meshes more accurately. Since we only update map tiles once per day, it will take a little time before this change becomes visible.

We’ve enabled a system called XBakes, which reduces the time that it takes avatars to fully rezz when they enter a world.

We now prevent the creation of users that have an underscore in their first name, because Firestorm doesn’t allow such users to login.