We updated our system today with a couple of features that were requested by Kitely Market merchants. It’s now possible to easily deliver product updates to all the people who had purchased them in the past. We also added a feature that allows users of grids that had shut down to regain access to their Kitely Market purchases.

Kitely Market merchants often make tweaks and improvements to their products even after they’ve been released. They’ve told us that they would like to have an easy way to deliver the new version of their products to all the people that had bought them in the past. This is now possible using a feature called “Batch Redeliver”.

To redeliver a product to all the Kitely avatars that had received it in the past, go to the product’s Edit page and click on Batch redeliver: 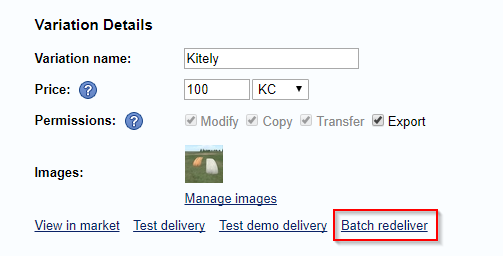 You will be asked to confirm, and then the latest version of the product will be added to the inventories of all of the Kitely avatars to which it was delivered in the past. These avatars will receive an IM telling them that they received the updated product. (Or an Offline IM, if they’re currently offline.)

This feature doesn’t deliver the updated product to avatars from other grids (i.e. non-Kitely avatars), because that’s very error-prone due to the many problems that can occur when communicating with other grids. The merchant can, however, send a product update to a specific non-Kitely avatar by going to the Sales History page and selecting the “Redeliver” option for that avatar.

This feature allows Kitely Market merchants to select orders that were originally delivered to another grid, and redeliver them to Kitely avatars.

It is completely up to the merchant to decide whether to use this feature or not. They might use it if they’re contacted by someone who had an avatar on the now closed grid, and transfer only that avatar’s orders. Alternatively, if a merchant hears that a grid has closed, they might decide to transfer all of the purchases that were delivered to any avatar on that grid.  Lastly, the merchant can decide that they would rather handle such cases in other ways and not use this feature at all.

This feature is described in detail here: Transfer Hypergrid Orders to Kitely.

Other Improvements and Bug Fixes

In the Kitely Market Sales History page, it’s now possible to search for orders by entering the name of the avatar that received the purchase. Until now it was only possible to search using the name of the user that bought the order. Usually the user that buys the order is also the receiving avatar, but they’re different in the case of Gifts, or when the order is delivered to an avatar on another grid.

We fixed a bug that caused a few fonts to stop working in OpenSim. The affected fonts were the Microsoft ClearType fonts, including Cambria and Calibri.