Today we’re introducing one of our most highly-anticipated features: big worlds! We’ve got all the details below.

(Update: we made additional improvements to big worlds; see our post about Advanced Megaregions for more information.)

Another new feature in this release is that the Public Worlds page now shows pictures for each world, which is much better for world discovery than the old text-only list.

You can now create high-performance worlds on Kitely that are up to 16 regions in size. We support the following world sizes:

The size of the world is set when you create the world, and can’t be changed afterwards. 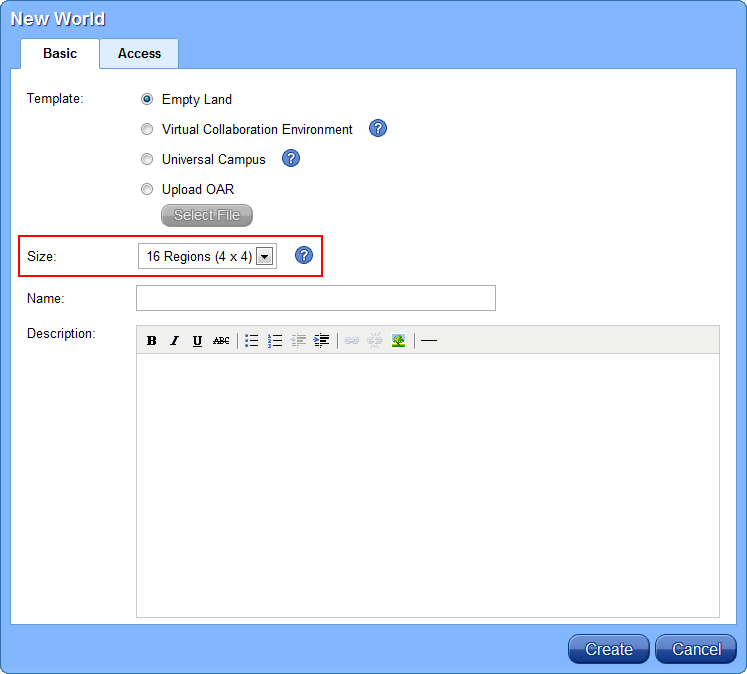 You can create additional worlds beyond your plan’s quota by using Kitely Credits (KC). Additional regions cost 10 KC per region per day. For example, a 4-region world costs about 4 (regions) * 10 (KC / region) * 30 (days) = 1200 KC per month, or $4 when buying KC at our maximum discount rate. The costs of copying, exporting, and replacing worlds are also dependent on the number of regions in the world. For example, copying a 4-region world costs 40 KC.

We optimized big worlds running on Kitely so that they’ll run better than on standard OpenSim. These optimizations reduce CPU and memory consumption on our servers, thus enabling Kitely to support more prims, scripts and users than can be supported with standard OpenSim.

With the addition of this new proprietary big-worlds module, Kitely now has two major services which provide improved performance over standard OpenSim: our cloud-based asset service and our high-performance big worlds. These services cleanly integrate with standard OpenSim, which enables us to provide you with all the latest OpenSim features while adding capabilities that standard OpenSim doesn’t provide.

Big worlds in Kitely use megaregion mode by default. A megaregion is a world that contains multiple regions, where the regions have been merged into one big region. Megaregions work better than multiple small regions in several ways: they smooth performance, enable better vehicle behavior, and make it easier to build without needing to consider region borders.

However, Megaregions are an experimental feature so some OpenSim features don’t work properly. For example, parcel audio doesn’t work except in the root region (the region at the South-West corner of the world). Therefore, some people will prefer not to use megaregion mode.

Kitely allows big worlds to run both as megaregions and as non-megaregions. You can enable and disable megaregion mode as often as you like in the Manage World dialog, and Kitely will convert the world to the new mode automatically. Note that switching modes can only be done when the world is inactive, so you may need to use the world’s Access controls to temporarily eject people from your world when you want to switch modes.

We’ve added a new built-in world template which you can use to create worlds: the Universal Campus (visit an example of this world). This is a highly-detailed big world (2 x 2 regions) that is ideal for organizations that need a lot of space for collaborative meetings such as classes, research group meetings, and conferences.

The Universal Campus was created by Michael Emory Cerquoni (a.k.a. Nebadon Izumi), and is licensed under the Creative Commons Attribution-ShareAlike 3.0 Unported (CC BY-SA 3.0) license. See the Universal Campus homepage for more information. 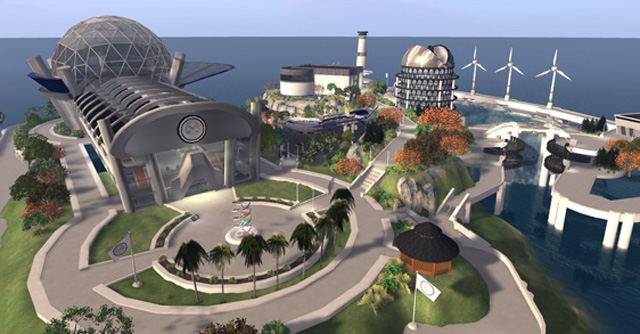 OpenSim Archive (OAR) files are used to save OpenSim regions. At Kitely we believe that you should have full control over your builds, so we support the use of OAR files to load and save worlds (with some limitations to protect third-party content). Since the current OAR format supports only one region per OAR, we’ve extended the format to allow storing multiple regions per OAR. This makes it possible to save your entire multi-region world in a single OAR file, thus making it easier to restore without having to load separate OAR files for each of the regions that make up the world.

Currently only Kitely can load and save this new multi-region OAR file format, but we’ve submitted the code that we developed to support this capability for inclusion in standard OpenSim. Once it becomes a part of standard OpenSim you will be able to exchange multi-region OARs with other grids, thus making it easier to move your multi-region builds between different OpenSim providers.

When you create a world by uploading an OAR file it’s possible that the number of regions in the OAR won’t match the world size that you selected in the New World dialog. When that happens we make the OAR fit the world as follows:

There is one caveat: because the multi-region OAR format is still under review for inclusion in standard OpenSim, the file format might still change. If that happens then any multi-region OAR files that you’ve exported from Kitely before the OAR format was finalized may fail to load into other grids. If that happens then you’ll need to export the world again using the final format to get it to load properly. However, this isn’t a problem for single-region OARs (created from single-region worlds) because their format hasn’t changed. We’ll post an announcement to this blog once the OAR file format is finalized.

That’s enough about big worlds. Now let’s talk about the other new feature in this release: world pictures. It’s now possible to upload an image for each world. This image is shown in two places: in the world’s World Page and in the Public Worlds page. 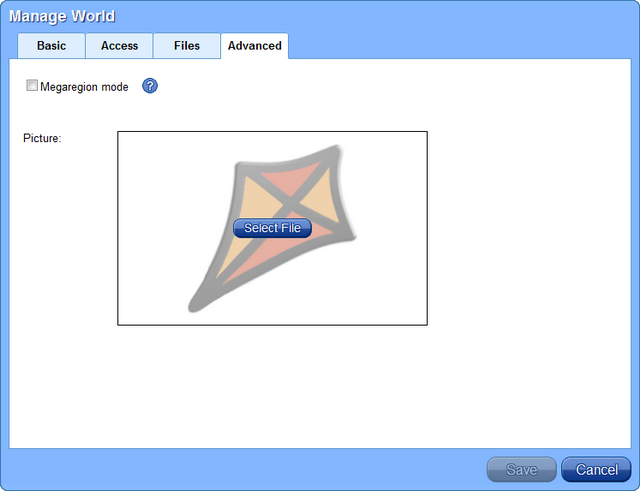 Click on “Select File” to upload a picture for the world. The picture will be resized automatically to fit in the available space. If you like the picture then click “Save”.

We’ve completely redesigned the Public Worlds page. Instead of the old text-only list we now show world pictures and titles in a grid. Here’s what this looks like: 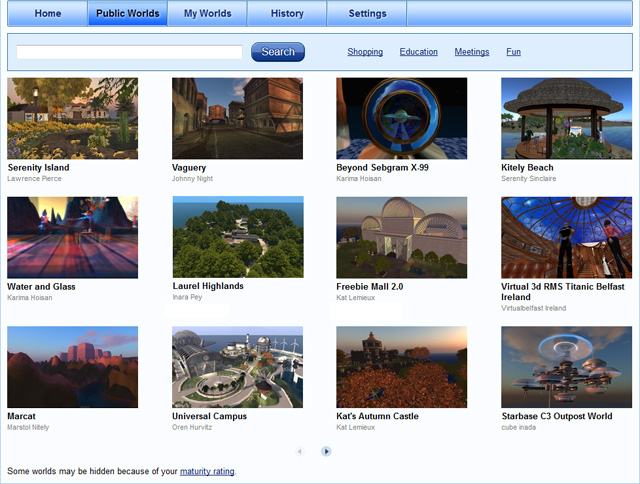 Please upload screenshots for all of your worlds; doing so has many benefits. First, people are more likely to visit your worlds if they can see what they contain in advance. Second, worlds that have pictures appear earlier in the Public Worlds page than worlds without pictures. And finally, the world picture is shown in social media links (e.g., on Facebook) when people “Like” your world.

It’s easy to create screenshots of your virtual world: simply press Ctrl+` or Ctrl+Shift+S. For more information, see taking snapshots. When capturing screenshots we recommend that you set your virtual world viewer to the best graphics options that your computer can support: set draw distance to max, enable shadows and full reflections, select environment settings that show your world in attractive lighting, etc.