We updated our system today with several features and bug fixes that make using Kitely easier. These improvements address the main OpenSim issues that were reported in our forums over the last few weeks.

We now support a safe way to make prims phantom. But first, some background: content creators sometimes want to make a single prim phantom in a linkset. This is not directly supported by OpenSim (or Second Life), so people have come up with scripts that set the prim to phantom and make it remain phantom even if the linkset is taken into the inventory and then rezzed. These scripts are complicated and somewhat dangerous, because if they’re interrupted while running then the prim might lose some of its attributes.

Fortunately, now there’s a better way to make prims phantom: by setting the prim’s Physics Shape Type to “None”. Technically the prim isn’t phantom, but this has the same effect: it allows avatars to walk through the prim. You only need to set this attribute once, and no scripts are required. We recommend that anyone who is using “Phantom Child” scripts to make prims phantom remove those scripts and use this feature instead. 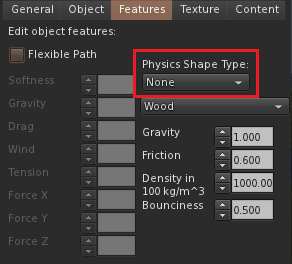 By the way, below the Physics Shape Type dropdown you can see a few other physics settings: Gravity, Friction, etc. These settings aren’t currently used in OpenSim. They might be used in the future, when OpenSim switches from the ODE physics engine to BulletSim.

Failed to find Bodypart in Database

Sometimes when users log-in they get errors such as “Failed to find Bodypart in Database”. These errors are shown when there’s a problem with one of the user’s Wearables (clothes or body parts). We’ve investigated this problem and made some fixes that should reduce the frequency of these errors. One of the reasons that these problems can happen is switching between V1 viewers and V2/V3 viewers, because they use different methods to store Wearables, so making changes in one viewer may not be visible in the other viewer. We’ve improved the situation but it might still occur. Another reason this problem can happen is because of a peculiarity in the way some viewers (such as Firestorm) tell the server when the user has worn or taken off something. We will contact the Firestorm team to ask them to improve this behavior, but for now this cause for the problem remains.

If you encounter this problem then please let us know in the forums, because we can enable additional logging that will help diagnose why this happens. This logging is done per-world, so we would need to know which world you are using.