We’ve updated our system today with new features that make Kitely easier to use. First, we’ve made it easier to work on worlds outside of Kitely by introducing an intelligent way to replace existing worlds with new OAR files. Second, you can now automatically disconnect yourself if you are inactive for a long time. Similarly, you can disconnect visitors to your worlds if they are inactive for a long time. Finally, we added a progress bar during OAR file uploads.

It is now possible to intelligently replace the contents of an existing world with a new OAR file. This is useful if you are working on the world outside of Kitely, and you want to update your Kitely world with the latest version. In the past you had to create a new world, but then all of your settings were lost. The Replace World feature is smarter: it keeps some of your existing settings, so that you don’t have to enter them again. We save the following settings:

The Replace World feature can be found in the Files tab of the Manage World dialog. (This dialog was previously called Edit World; we renamed it.). We’ve also moved the Export World feature to this tab. 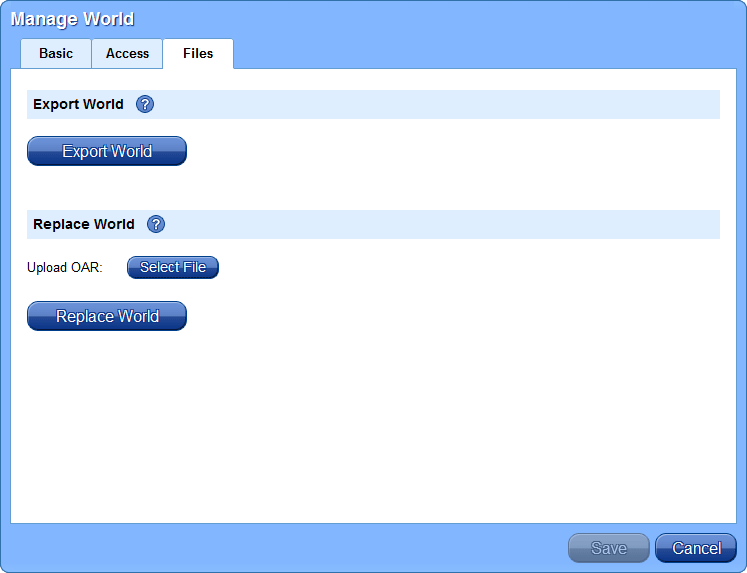 Some people felt anxious about accidentally forgetting to disconnect when they left their computer and losing Minutes because of it. Other people asked for a way to automatically remove people who were “parking” their avatars in their worlds (i.e., remained logged in even when they were inactive for extended periods of time). We’ve listened to your concerns and have added a couple of features that enable you to automatically disconnect yourself, and/or people who visit your worlds, when your avatars haven’t moved or chatted for more than 30 minutes.

Your Kitely account Settings page now includes a setting called “Disconnect from worlds when idle”. When that setting is enabled (which is the default), you will be automatically disconnected from the world you are in if your avatar remains inactive for 30 minutes.

Each world has a similar setting in its Access tab, called “Disconnect idle visitors”. When enabled (which is the default), visitors to the world that are inactive for 30 minutes will be automatically disconnected. This is especially useful when you set the world to allow free access to your friends, because it prevents them from accidentally using up too many of your Kitely Credits. 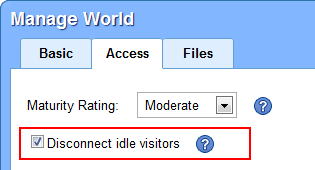 When a user has been idle for 3o minutes we don’t disconnect them immediately: we show a warning message first. The user then has 1 minute to click on a button labeled “I’m Here” to prove that his or her avatar is still active. If they do so then they can continue being idle for another 30 minutes before the warning message appears again. If they don’t click the button within 1 minute then they’re automatically disconnected from the world. 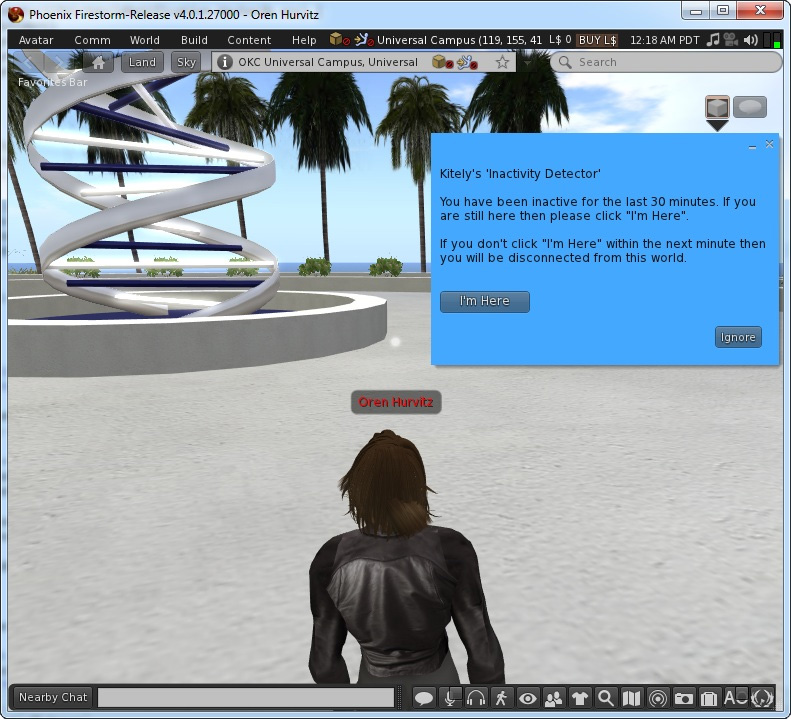 We’ve updated the Mac version of Kitely Plugin to version 2.0.1. The only difference from version 2.0.0 is that we use a digital certificate to sign the plugin (for the first time on the Mac). The reason we added this certificate is that Apple are about to release a new version of Mac OS X in which only signed applications can be installed.